Okinawa Kuminosato is the only recuperation center for Fukushima children in Japan that is open throughout the year. 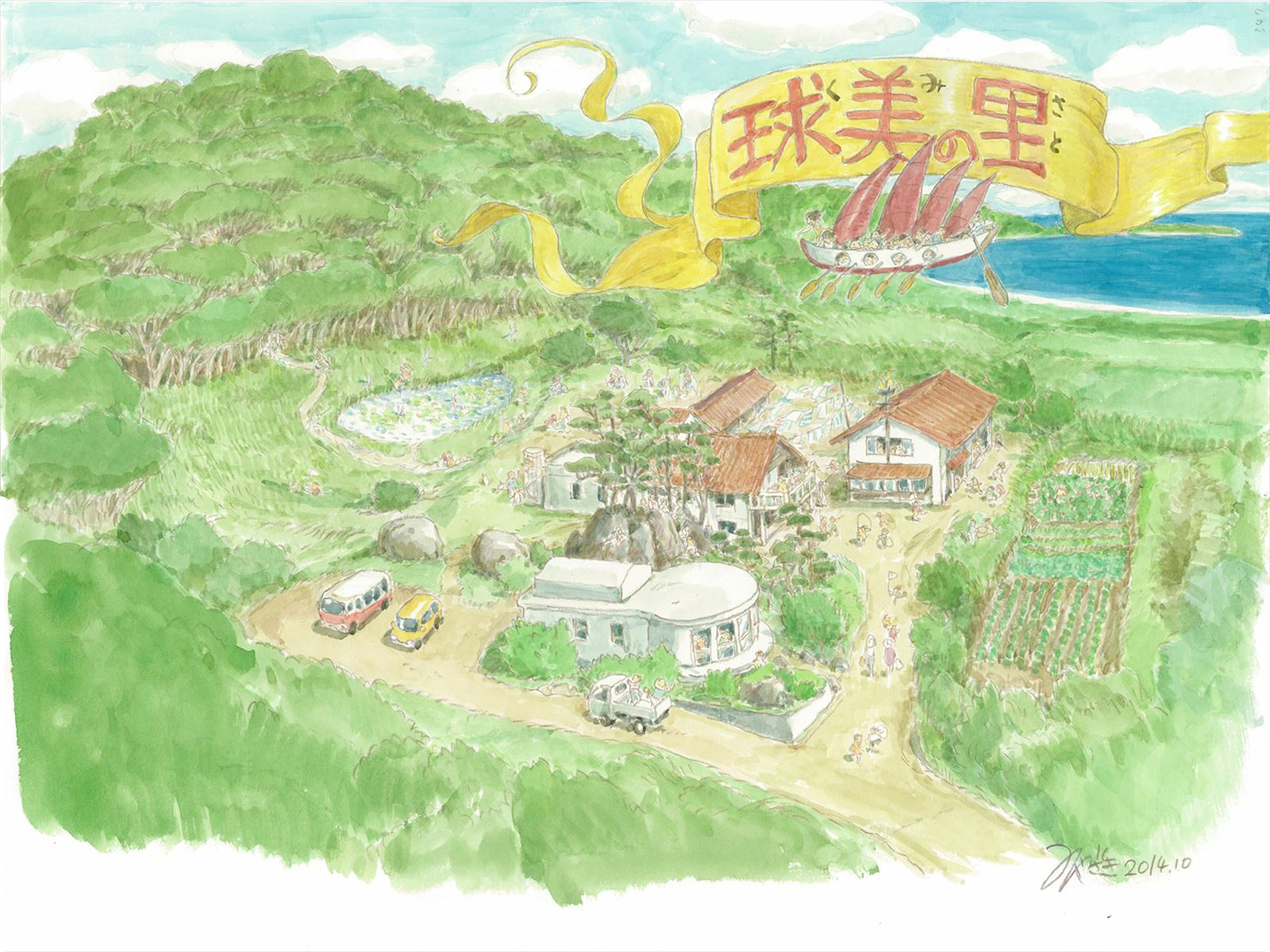 Background of Its Foundation

On March 11th, 2011, the Great East Japan Earthquake triggered the Fukushima Daiichi Nuclear Power Plant Disaster. Two months later, in May, a monthly magazine, DAYS JAPAN, initiated a ‘fund-raising campaign to help provide radiation measurement instruments’ to the effected areas, and together with the Fukushima Children’s Fund, that was established by the volunteers from the Chernobyl Children’s Fund, we delivered a number of food radiation monitors and whole-body counters to citizen’s groups in Fukushima Prefecture. This resulted in the establishment of at least six citizen’s radioactivity measuring stations.

Subsequently, in October, DAYS JAPAN set up the Days Japan Support Fund for the Children of Fukushima and initiated a recuperation project for the child victims of the Fukushima Nuclear Disaster. Its activities included support for food radioactivity monitoring stations and assisting in the establishment of recuperation centers, utilizing the experience gained through its work with the victims of the Chernobyl Disaster.

Our efforts to find a venue for the center received support from numerous people and were finally rewarded when the former governor of Okinawa, OTA Masahide, introduced us Kume Island. Kume Island is situated approximately 100 kilometers west of Okinawa’s main island and takes three and a half hours by ferry or less than thirty minutes by aircraft to reach from there.

The view from here includes Eef Beach, which has been selected as one of Japan’s One Hundred Most Beautiful Beaches, and Hate-no-hama, a sand beach on a coral reef that is the longest in the orient, while from verandah the sun can be seen rising from the ocean.

On a sunny day Tonaki Island, Kerama Islands and Zamami Island can be seen.

A press conference was held in March 2012 to announce the foundation of a recuperation project for Fukushima children that was attended by the mayor of Kume Island and artist/musician ISHII Tatsuya. Work began immediately to refurbish the buildings and on July 5th when the center opened, receiving the first group of fifty-one, consisting of Fukushima children and their guardians.

The number of children and guardians we have accommodated up until today is here: Number of participants 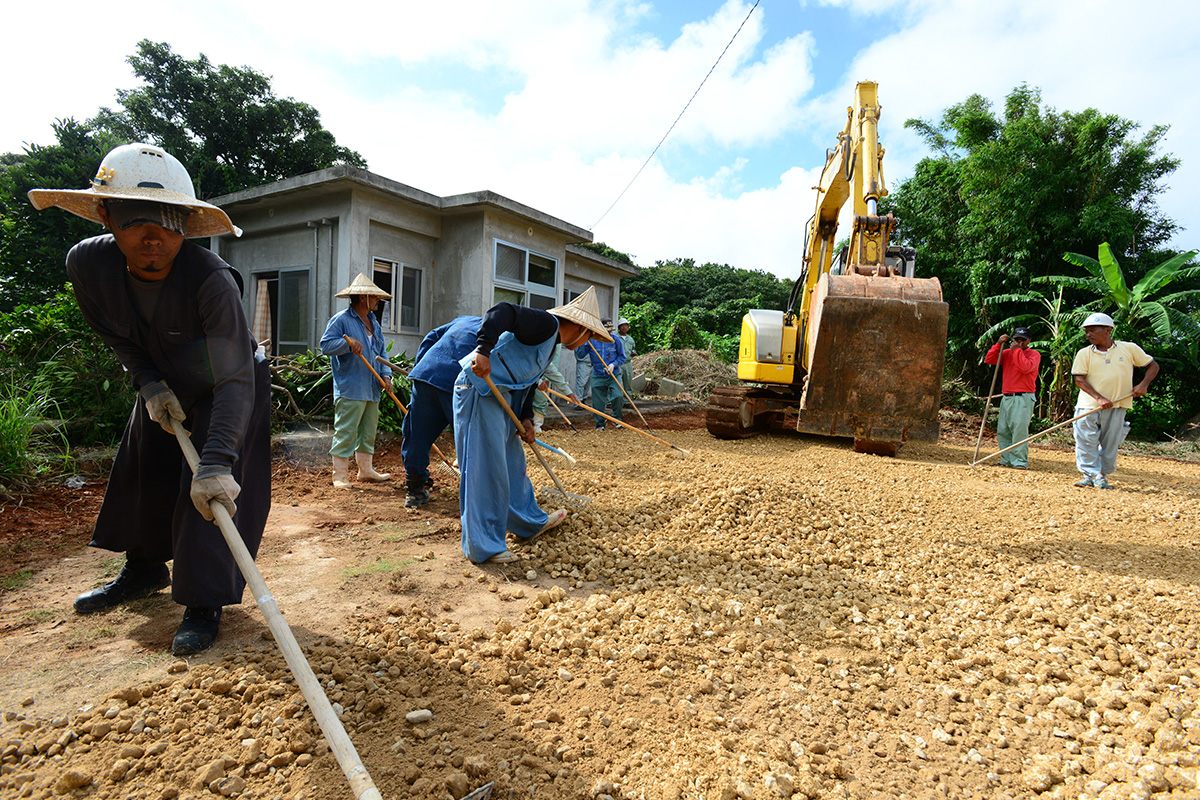 Our objective is to help maintain the health of children who have been affected by Fukushima Nuclear Disaster.
After the Chernobyl Disaster, there were many people in Japan who repeatedly stated that the same kind of disaster could easily happen here in Japan. Unfortunately, however, nobody was able to prevent the disaster, and it has produced numerous victims. Both the government and the media repeatedly stated that ‘NUCLEAR POWER IS SAFE’, with the result that large numbers of people were exposed to radiation. Even now, there are people who are forced to live as refugees and children who continue to reside in highly radiation-contaminated areas. Moreover, some of these areas have the levels of contamination equal to those of the exclusion zone around Chernobyl. Even after more than one and a half years, the Fukushima Nuclear Disaster continues to afflict huge numbers of people today. Considering that the effects of Chernobyl Disaster have already endured for over twenty-six years, the impact of Fukushima Nuclear Disaster can be said to be far from over.

Some may think that it was a man-made disaster, the officials responsible should carry out the relief and support activities. We naturally consider these activities to be very important, but time does not wait. We cannot simply leave the children as they are until the responsible officials start to do their job.

The damage has been quite extensive but the children who still live in the radiation-contaminated areas or who were exposed to radiation during the initial disaster can restore their health and may become immune to future diseases if they are able to visit recuperation facilities for certain period of time.

The objective of Okinawa Kuminosato is to free these children from stress by offering uncontaminated ground for them to play spontaneously, and delay from the progress of internal exposure by supplying uncontaminated food, allowing them to build up their resistance and immunity.

Following the Chernobyl Disaster, radiation affected peoples’ immune systems, leading to the appearance of various serious diseases. A lot of people look to advanced medical care for the prevention of diseases in children, and although this is definitely important, our relief activities over twenty years at Chernobyl have taught us that recuperation is effective method of preventing damage to the immune system by radiation. Our task is to protect children from further exposure to radiation, to allow them to eat safe food in order to prevent internal exposure, to free them from stress and let them spend their time in a leisurely fashion. We believe that by so doing, we can avoid the future occurrence of disease in these children.

The Okinawa Kuminosato is a facility established to offer children time and space for recuperate. Some say that children’s health will reverse as soon as they return home because a mere two or three weeks’ is insufficient for a full recuperation. Indeed even though they do build up their resistance, it is only a matter of time before their immune systems and resistance will weaken again. That is why, in Chernobyl, they say it is necessary to repeat recuperation before the occurrence of disease due to lack of resistance. Evacuating children is the best solution, but if this is not possible, there is no other way but repeated recuperation. 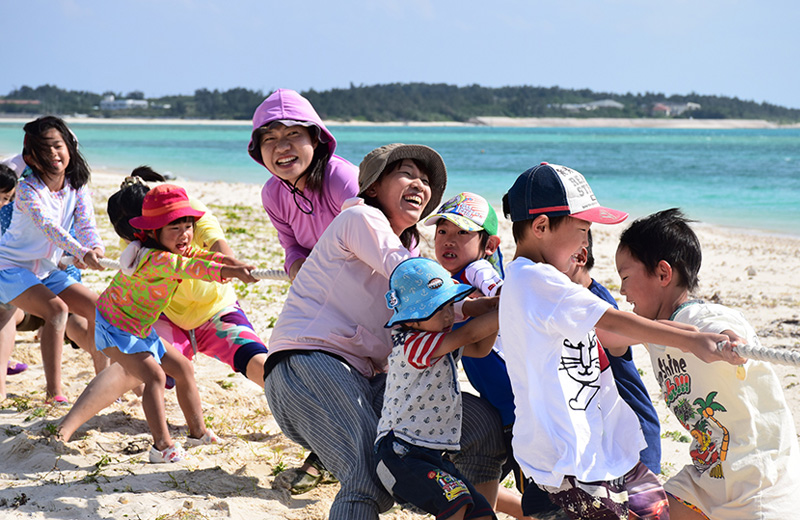 The incorporated NPO Okinawa Kumi No Sato is run by a committee which has full responsibility of its operation. Its headquarters are situated at 2-19-7 Tak Eleven Takatanobaba702, Takatanobaba, Shinjuku-ku, Tokyo.

MUKAI Yukiko serves as the Chairman of the Committee, and SUZUKI Kaori as its Vice Chairman. Its administration is carried out at three offices: ‘Tokyo’, ‘Iwaki’ in Fukushima Prefecture (managed by SUZUKI Kaori) and ‘Kume Island’ in Okinawa.

Each office has its own main duties: the Kume Island Office deals with management of the recuperation center, accommodation for the children and their guardians and receiving volunteers; the Iwaki Office handles applications for the recuperation program and dispatching the respondents to the center; the Tokyo Office handles fund-raising for the operation and organizing P.R. events.

Registered as an Incorporated NPO in October 2012, the organization operates solely on donations, mainly from individuals, without any governmental support. These donations include the proceeds from the concerts held across Japan, including a contribution by ISHII Tatsuya, who has run a charity event called ‘Ground Angel’ for more than ten years. This was gratefully received and used for the refurbishment of the buildings. In addition, there have been other substantial anonymous monetary donations.

We take care of victims here. This is not a place to speak out against nuclear power plants. But it is necessary at least to put ourselves in the victim’s shoes.

Based on an understanding of our position, donations are sent in, and volunteers offer to help us. 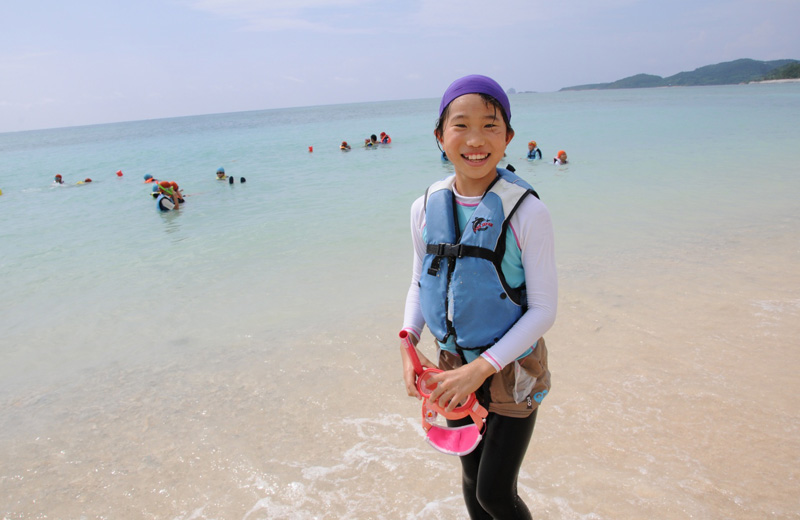 The staff working here must be independent individuals who want to be involved in the purpose of this facility. Working here can be harder than working elsewhere, but we have to constantly keep in mind that the people who help us as unpaid volunteers have an even harder job.

Moreover, not only the directors and members of this project, but also the staff too might not be able to continue working here unless they truly empathize with our philosophy. If they do not do so, we think they cannot build a good relationship with our volunteers. When we employ people, we ask for their signature, which symbolizes their deep understanding and empathy with our philosophy.

And as with our staff, we also want anyone wishing to become a volunteer, or wanting to apply for any job here, to read our philosophy of Okinawa Kuminosato over and over, and to understand it thoroughly. Also, we want those who wish to be part-timers to cooperate only after reading it, and constantly renew their agreement with our philosophy.

Why Was This Facility Built in Okinawa?

We have to seriously take to heart the meaning of why this facility was built in Okinawa.

Especially, Kume Island is the location of a heartbreaking incident in which residents of the island were executed by the Japanese military after the Battle of Okinawa. History shows that Okinawa was occupied by Japan, sacrificed for Japan’s war, and offered as an occupied territory to the U.S. military. Even now it is also occupied by vast U.S military bases, and it continues to experience discrimination and suffering. 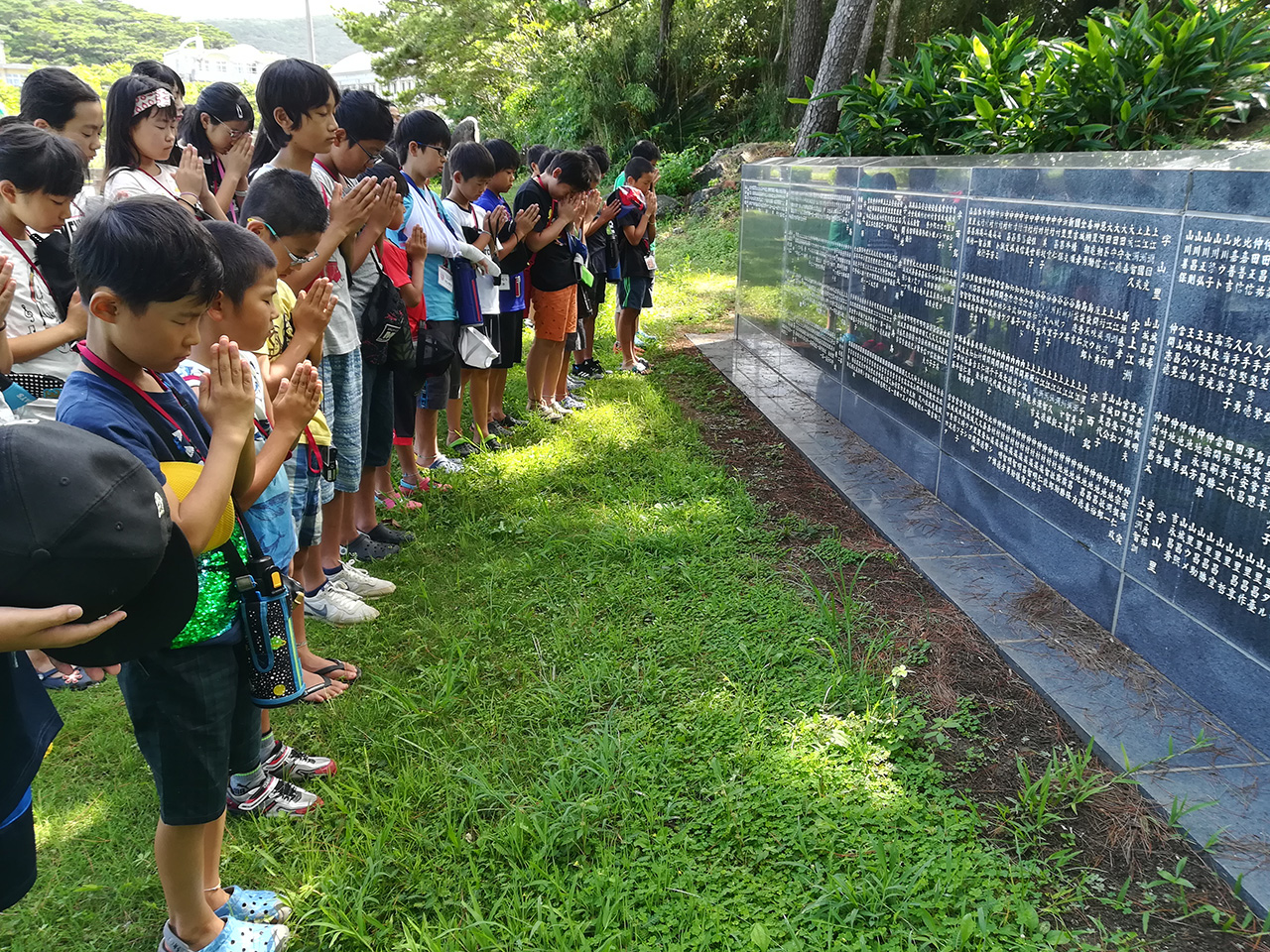